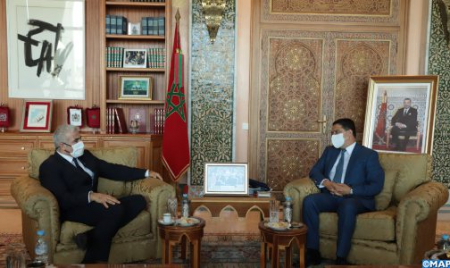 Minister of Foreign Affairs, African Cooperation and Moroccans Abroad, Nasser Bourita, held on Wednesday in Rabat, talks with his Israeli counterpart Yair Lapid on a series of bilateral and regional issues of common interest. At the end of the meeting, the two ministers signed a memorandum of understanding on the establishment of mechanisms for political consultations with the aim of contributing to the deepening and strengthening of the multifaceted relations of cooperation between the two countries. The two parties also signed a cooperation agreement covering the fields of culture, youth and sports to contribute to the development and strengthening of bilateral relations. The two ministers also signed an agreement on air services between the two countries. Speaking on this occasion, Bourita mentioned a virtuous dynamic between the two countries since the signing last December of the Tripartite Agreement (Morocco-US-Israel), with the creation of five working teams covering promising sectors, such as research and innovation, tourism, aviation, agriculture, energy, environment, trade and investment. Regarding the situation in the Middle East, the Minister referred to the repeated call by His Majesty King Mohammed VI, Chairman of the Al Quds Committee, for the resumption of negotiations between Palestinians and Israelis to reach a final, lasting and comprehensive solution based on the two-state solution living side by side in peace and security. For his part, the Israeli Minister of Foreign Affairs indicated that the signing of these cooperation agreements will bring innovation and mutually beneficial opportunities to both parties, stressing the imperative of cultivating hope to transcend the hatreds inherited from the past. He stressed that his visit to Morocco, the birthplace of a vibrant Jewish community dating back to the 2nd century BC, is part of a futuristic vision driven by the virtues of friendship and cooperation, notably in the fields of tourism, economy, trade, and cultural exchanges. Yair Lapid who is visiting Morocco leading a delegation including the Minister of Labour, Meir Cohen and the Chairman of the Foreign Affairs and Defense Committee of the Knesset (parliament), Ram Ben Barek, visited the Mohammed V Mausoleum in Rabat where he paid his respects to the graves of the late Sovereigns, HM Mohammed V and HM Hassan II.