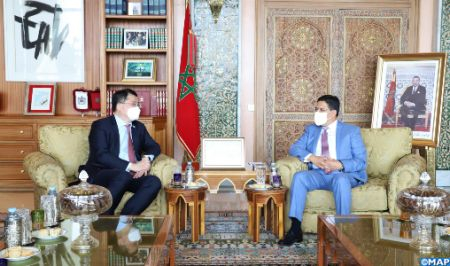 Minister of Foreign Affairs, African Cooperation and Moroccans Abroad, Nasser Bourita, received, on Monday in Rabat, South Korea’s First Deputy Minister of Foreign Affairs, Choi Jong-kun. In a statement to MAP at the end of this meeting, Jong-kun highlighted the friendly relations between the Republic of Korea and Morocco. The South Korean diplomat, who is on his first visit to the Kingdom, expressed his great esteem for His Majesty King Mohammed VI and His leadership in the management of the Covid-19 pandemic “which we are facing and will work together to overcome”. Choi also indicated that this first trip will be followed by other visits, saying he was optimistic about the future of exchanges between the two countries. Describing his talks with Bourita as fruitful, the South Korean diplomat expressed his thanks to the Moroccan government for its hospitality.