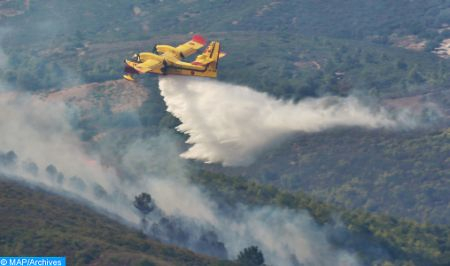 Efforts are continuing, on Monday, to control a wildfire that burnt, in less than two days, around 725 hectares of the “Sougna” forest, located between the communes of Tanakoub and Derdara (province of Chefchaouen). Approximately 520 elements of the Waters and Forests, civil defense, auxiliary forces, the royal armed forces and the Royal Gendarmerie, as well as local authorities, are still mobilized to extinguish this fire, which broke out on Saturday around 2:30 pm, supported by ground technical means, four “Canadair” planes of the Royal Air Force and four Turbo trush planes of the Royal Gendarmerie, the head of the National Center for Forest Climate Risk Management Fouad Assali told MAP. This fire has ravaged, so far, nearly 725 hectares of forests, composed mainly of cork oak and pine, he said. An investigation was opened to determine the causes of the fire.