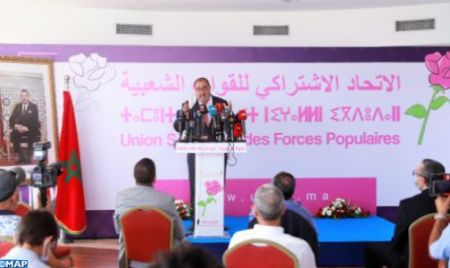 The First Secretary of the Socialist Union of Popular Forces (USFP), Driss Lachguar, called, Monday in Rabat, for a new political changeover with a social and democratic vocation to allow all Moroccans to enjoy a decent life. During a press conference devoted to the presentation of the party’s electoral program in view of the upcoming elections on 8 September, Lachguar described this changeover as necessary to guarantee Moroccans the right to a dignified life, health, education and employment, while making the human element a lever for development. Lachguar, who expressed his party’s ambition to be among the top three in the next elections, said that the alliances after the election are “clear”. “We are the left, and we can only make alliances with true liberals, the values of liberalism being equality, freedom and justice,” he said. He also stressed that the electoral program of his party is the Moroccan social-democratic response to the major issues and challenges brought about by the health crisis, in Morocco as in the rest of the world, stressing that it “outlines a possible path, a renewed approach and a realistic alternative”. In this regard, the First Secretary of the USFP noted the need to strengthen the social roles of the State and to direct its vital interventions in economic life and development so as to consolidate the foundations of a strong and just State and to promote a modern and solidarity-based society.