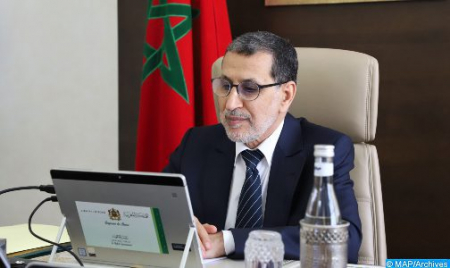 A Council of Government, to take place on Monday, will examine fourteen draft decrees, including one on the application of articles 32 and 35 of the law on legal use of cannabis and another related to the amendment of the decree extending the state of health emergency throughout the national territory to curb the spread of Covid-19. The Council will also examine four draft decrees regarding appointments to high functions and the salaries and allowances relating thereto within the administrations of the regions, the administrations of the prefectures and provinces, the administrations of the communes and districts, as well as the administrations of the institutions in charge of cooperation between municipalities and groupings of local authorities. The seventh draft decree defines the constituencies of the courts specializing in money laundering crimes, while the eighth one deals with the organization of the National Financial Intelligence Authority. As for the ninth project, it establishes the composition of the permanent committee for the renewal and adaptation of programs and curricula and its working groups, as well as its operational modes. The Council will then examine a draft decree amending and supplementing the decree relating to the application of the law relating to the practice of medicine and another one establishing a commission for monitoring this profession by foreigners in Morocco. Two other draft decrees concern the easements of clearance installed near airports open to air navigation as well as the radio installations created next to communication, navigation and control equipment relating to air navigation, while the last one is establishing the organization of summer centers under the governmental authority in charge of youth. The Council will complete its work by examining proposals for appointment to high office in accordance with the provisions of article 92 of the Constitution.