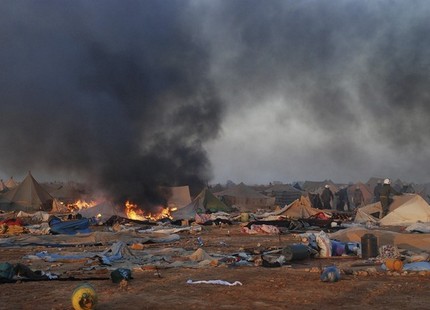 Two years after the Gdeim Izik deadly clashes, the makeshift camp, set up near Laayoune, Western Sahara, is topical again with the opening this Friday of the trial of 24 people charged with killing 11 policemen and members of the Moroccan security forces. The 24 defendants, appearing before a military court in Rabat, were arrested following the violent clashes that took place in Gdeim Izik on November 8, 2010. That day, the Moroccan police had proceeded to dismantle a tent camp set up a month ago by Sahrawi families from Laayoune to protest their living conditions and claim jobs and housing. But between October 10 and November 8, the camp was transformed. As Moroccan authorities left the camp open to facilitate the supply of families with water and foodstuffs, individuals armed with knives and other edged weapons infiltrated the camp and gradually occupied the premises. In less than a month, the friendly and good-natured atmosphere changed and the camp turned into a pro-Polisario militia-controlled compound.

When the order to evacuate the camps was given, the police, equipped only with batons, were the first victims of the clashes with the intruders. The death of 11 young officers, whose bodies were mutilated, triggered a wave of indignation, especially as scenes of odious violence were filmed. Photos and videos of the acts of violence against police agents were circulated widely on the web. The footages are all additional evidence to the charge against the defendants. The families of the policemen killed gathered outside the military court in Rabat, demanding justice for their beloved ones. According to judicial sources, the defendants could face the death penalty.