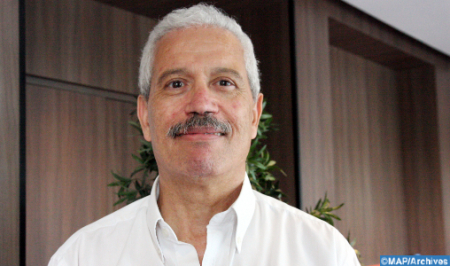 The speech delivered by HM King Mohammed VI, on the occasion of the 68th anniversary of the Revolution of the King and the People, reiterates Morocco’s desire to improve its relations with its traditional allies and partners, in particular France and Spain, said writer Moha Ennaji. “Morocco wishes to develop better relations with France and Spain after the end of the crisis, on the basis of trust and mutual respect,” Ennaji told MAP. The Sovereign also denounced the defamatory actions of organizations and countries hostile to Morocco, which are trying to destabilize the entire Maghreb region, said Mr. Ennaji, who is also president of the South-North Center, based in Fez. The royal speech, he added, expressed Morocco’s strategy, based on transparency, trust and respect for commitments, with a view to building solid bilateral relations with all neighboring countries in the spirit of dialogue and respect of good neighbourliness while preserving its supreme interests. Regarding the holding of the upcoming legislative, regional and local elections, HM King Mohammed VI stressed that these elections as a lever for sustainable development are intended to consolidate the democratic process and serve the general interest of the Nation. According to the academic, the royal speech “reminds political parties of the purpose of democratic consultation, which is to serve the citizen and address internal and external challenges.” Mr. Ennaji also noted that the royal speech recalled the secular history of the Moroccan State and its large Amazigh component, adding that the Sovereign invited all the country’s forces to mobilize around major national issues within the framework of the new Development Model, in accordance with the National Development Pact to develop and strengthen the national economy and establish the Kingdom as a regional and global player on the international scene.