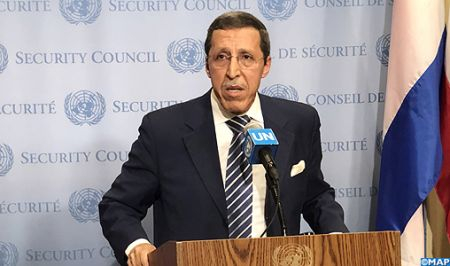 Using his second right of reply to misleading remarks by the representative of Algeria, Soufiane Mimouni, about alleged self-determination of the “people of Western Sahara” and “occupation of the Sahara by Morocco”, during the C24 seminar for the Caribbean in Dominica, the Moroccan ambassador to the UN, Omar Hilale, regretted that his Algerian colleague had resorted to insult, invective and denigration in his response to the Moroccan argument, disregarding the tone befitting a UN meeting, noting that “the insult is the weapon of the weak”. Hilale also stressed that the self-determination of the population of the Moroccan Sahara was achieved with the recovery by Morocco of its Saharan provinces, and is exercised daily by this population, since then, and this through several founding acts and strong political actions, including: – The defense of the Kingdom’s territorial integrity at all levels on the national and international diplomatic level. – The appropriation of the different electoral and referendum events, which is the supreme expression of the right to self-determination, and this in a serene, calm and responsible climate, confirmed by the reports of the UN Secretary General to the Security Council. -The massive participation in the legislative, municipal, communal and regional elections, with the highest participation rate in the Kingdom, more than 65%, which is by no means the case of the very low participation of 0.1% in Kabylia, Algeria. – The choice of the population of the southern provinces of the Kingdom to build in the Sahara a peaceful, inclusive, open, tolerant and resolutely committed to democracy and respect for human rights. – The contribution of this population to the socio-economic and cultural development of the Moroccan Sahara. -The daily commitment of all societal components of the Sahara, especially youth and women, to the implementation of the New Development Model of the Southern Provinces, initiated by His Majesty the King, since 2015. – The escape of tens of thousands of Moroccan Sahrawis from the Tindouf camps at the risk of their lives, and their return to the motherland, Morocco. More than 20,000 people have fled the Tindouf camps and several dozen have been killed by the Algerian army or by “polisario” mercenaries while trying to escape. The Moroccan ambassador summarized that self-determination is a voluntary act of citizenship in the Moroccan Sahara. He then put the representative of Algeria in his place, following his umpteenth drift and obsessive recurrence of his country on the alleged right of the Moroccan Sahara to self-determination and on what he deemed, with insolence, so-called “last colony of Africa and colonizing state”. The Moroccan ambassador wondered before the participants in this meeting: Which territory or country invited to this seminar has a bellicose neighbor that has imposed an armed conflict on them for decades and is attacking them through an armed separatist group? None. Only Algeria is guilty of this single most serious anomaly with regard to Morocco and its Sahara. Hilale reminded the Algerian ambassador that “self-determination is a universal and UN principle, which must not suffer any selectivity and must benefit all populations, especially those under occupation for decades, adding, in this context, that “Algeria which boasts, on all occasions, to claim it with monomania for the Moroccan Sahara, forgets that there are populations in its own country that claim to be able to benefit from this same right to self-determination”. The Moroccan diplomat added that “the Kabyle People, who existed long before the creation of the Algerian state, also has the right to self-determination. Why Algeria denies them what it requires for the Moroccans of the Sahara, going so far as to impose on the Kingdom a conflict for 45 years, by a separatist armed group? And why don’t the representatives of the Kabyle People have the right to be present in this meeting of the C24? They also have the right to express themselves freely on their future,” he concluded.