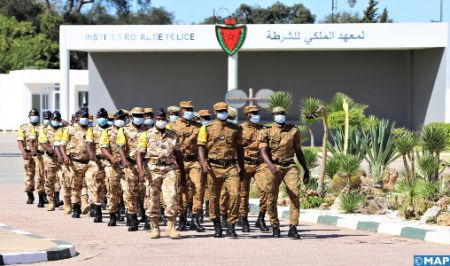 The training cycle provided by the national police (DGSN) to twenty-nine Burkinabe officers of the Republican Security and Protection Group (GSPR) ended Monday at the Royal Institute of Police (IRP) in Kenitra. The delegation of police officers from Burkina Faso is composed of two groups of twenty-four police officers in total who have been trained for one month in security and protection of high officials and five others instructed on monitoring in sports to which the specialized instructors of the IRP have provided training in about 14 disciplines combining the theoretical and practical aspects. As part of the South-South cooperation advocated by Morocco, this high-level training that meets international standards in security, required the beneficiaries of both physical and mental qualities in order to assimilate all the techniques and automatisms allowing them to carry out their missions as monitors in sports and field related to close protection. In a statement to MAP on this occasion, the Prefect of police, director of IRP, Ahmed Zaari, said that the DGSN contributes for several years to the training of several delegations of police officers from African countries brothers and friends, adding that the policy of the DGSN is in line with the vision of Morocco in terms of promoting South-South cooperation, which is of primary importance and is one of the pillars of the national security administration. For his part, Captain Ahmed Issiaka Drabo, head of the Burkinabe delegation of GSPR, stressed that this training is an opportunity to learn new techniques of close protection that will allow the beneficiary officers to act and carry out their missions on the ground with more competence and professionalism. The divisional Commissioner, Head of the Department of International Cooperation and Training Specialization, Tariq El Bazi, noted that the DGSN, whose expertise is valued by many countries, now enjoys international recognition in several areas, stating that these actions are part of the South-South cooperation in which the IRP is placed as a regional center of excellence for police training. “We came to Morocco, our second country, to take advantage of a training course in sports monitoring and since our arrival we are very well received, we feel hospitality and great consideration for us,” said Chief Sergeant, sports monitor at the GSPR, Coulidiati Hadi Daniel, adding that the members of the delegation received a “great knowledge that will be beneficial to us once back in our country and that we will be able to pass on to our colleagues in Burkina Faso.