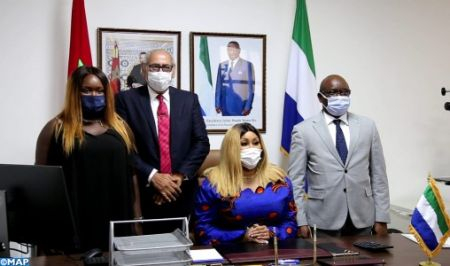 Sierra Leonean diplomat Zainab Candy was installed, on Monday, as her country’s consul general in Dakhla. Candy was installed in her position by the Ambassador of the Republic of Sierra Leone in Rabat, Atumanni Dainkeh, during a ceremony organized at the headquarters of the consulate of this African country, in the presence of the Wali of the region of Dakhla-Oued Eddahab, governor of the province of Oued Eddahab Lamine Benomar and the director general of the Moroccan International Cooperation Agency, ambassador Mohamed Mitqal. In a press statement, Dainkeh noted that the installation of the Consul General reflects the excellent relations between the two countries, as it reaffirms his country’s position in favor of the territorial integrity of Morocco. This act comes “to underline the excellent relations of friendship and cooperation and our will to pursue our partnership”, he insisted, recalling that Sierra Leone had firmly supported the will of Morocco to join its institutional family, the African Union (AU). The ambassador added that this event goes beyond the political aspect, especially since Dakhla is a region which boasts important economic and investment opportunities, noting that this act will serve the interests of both AU member states “from an economic point of view and for the well-being of both peoples”. For the Sierra Leonean diplomat, it is indeed a matter of facilitating the transfer of goods and services of the region to his country and strengthening trade between the two countries. For his part, Benomar expressed the “pride” of all actors in the Dakhla-Oued Eddahab region over the installation of Candy as Consul General of the Republic of Sierra Leone in Dakhla, stressing the availability of local authorities to work together to support cooperation mechanisms and encourage mutual visits between Moroccan and Sierra Leonean tourists and investors. He also assured that all administrative services and authorities in the region will give their full support to the Consul General to help her accomplish her diplomatic mission in Dakhla under the best possible conditions. Last Friday, Sierra Leone inaugurated its embassy in Rabat. The two countries also signed a roadmap aimed at strengthening bilateral cooperation in several areas.