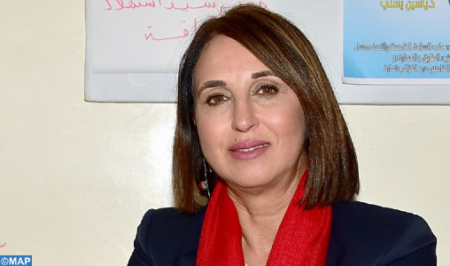 The secretary general of the Unified Socialist Party, Nabila Mounib, underlined that the national electoral program of her party for the next legislative, regional and municipal elections seeks to strengthen the development process of the country and overcome the obstacles hindering the completion of the reform process. These elections will undoubtedly produce elected officials capable of taking charge of the management of the country’s affairs, Mounib said in an interview with MAP, stressing the importance of the principle of the correlation of responsibility and accountability which constitutes a basis of the electoral platform of the party, in addition to the importance of the democratic process, political reforms and the fight against the violation of the law. Regarding the area of rights and freedoms, she noted the importance of implementing the recommendations of the Equity and Reconciliation Commission in order to create a climate conducive to political action, to restore the confidence of citizens in the political action and to strengthen the feeling of citizenship with the objectives of arousing collective mobilization for the defense of the homeland, investing the experiences accumulated by Morocco in various fields and thereby contributing to the march of progress. Regarding the economic component, Mounib said that the reform of the economic sector involves the fight against corruption, annuity and clientelism, in addition to the adoption a series of reforms concerning, in particular, justice, administration and education, after carrying out an overall assessment of the situation. The party’s program, she pointed out, also provides for several proposals to carry out this reform with a view to making the Kingdom an economic pole at the African level and which consists in particular in encouraging Moroccan industry to integrate the informal sector, supporting business initiatives and reforming the tax system. In order to improve the services of the health and education sectors, Mounib underlined the need for these two sectors to be under the responsibility of the State to ensure services “of very good quality and free of charge”. Regarding the youth sector, she stressed the importance of giving more interest to this section of society by restoring the role of youth centers and by working to build more establishments at the national level to reach 15,000 youth centers in order to build the capacities of beneficiaries in various fields. Commenting issues relating to women and children, Mounib affirmed that gender equality in all areas constitutes an essential pillar of the party’s actions program, adding that the party considers that women’s empowerment on the basis of equal citizenship requires fundamental changes. Noting the great interest that her political party gives to issues relating to children, Mounib said that the party is committed to defending the protection of children and preserving their rights through the development of a national strategy in this regard. With regard to the candidates, she specified that the party was able to initiate “an exceptional internal mobilization” thanks to a rigorous selection of its candidates who have great capacities and skills, in addition to their will to serve the country.