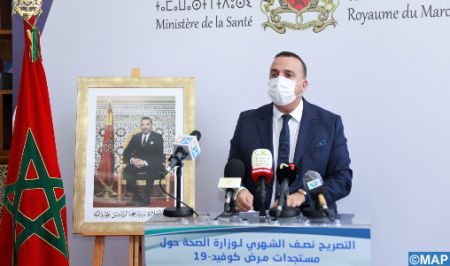 The Covid-19 epidemic wave is in full decline in Morocco after the peak reached around mid-August, the Ministry of Health said on Tuesday. The study of the available data shows that “the curve of the epidemic entered a downward phase after a five-week phase of increase in cases and reached a peak before mid-August 2021”, said the head of the communicable diseases division at the ministry, Abdelkrim Meziane Bellefquih who was presenting the bimonthly report (17-30 August) of the epidemic situation. The current phase, still at its beginning, will be followed by another phase marked by a drop in critical cases and deaths, the official added. During the past two weeks, the Kingdom has witnessed a drop in cases of infection with the virus, the weekly number of which dropped from 63,174 in mid-August to 42,424 at the end of this month, that is a decrease of 17.6%, he said. As for the reproduction rate, it stabilized below 1 for the third consecutive week, thus confirming the start of the downward curve from the point of view of positive cases, added Bellefquih. The positivity rate has registered a considerable drop from 23 to 18%, noted the official, adding that the eastern region has the highest positivity rate (31%), while the region of Fez-Meknes recorded the lowest rate (9%). Regarding active cases, there were nearly 60,000 cases as of August 30, against 80,000 in the latest report, an effective decrease of 25%. Intubated cases have also seen a noticeable drop in the past two weeks (-14%), as has the number of weekly deaths, dropping from 775 deaths to 645 last week. However, the number of severe cases registered a slight increase with 2,389 cases two weeks ago, against 2,537 cases on Monday, said Bellefquih, explaining that this increase reflects the pressure on the health system at this time. He also said that Morocco has exceeded 33 million injections, first and second doses combined, recalling the expansion of anti-Covid-19 vaccination for the 12-17 age group. In this context, the Ministry of Health urged citizens to show a high sense of responsibility and vigilance with a view to preserving achievements and preventing any resurgence of the pandemic.