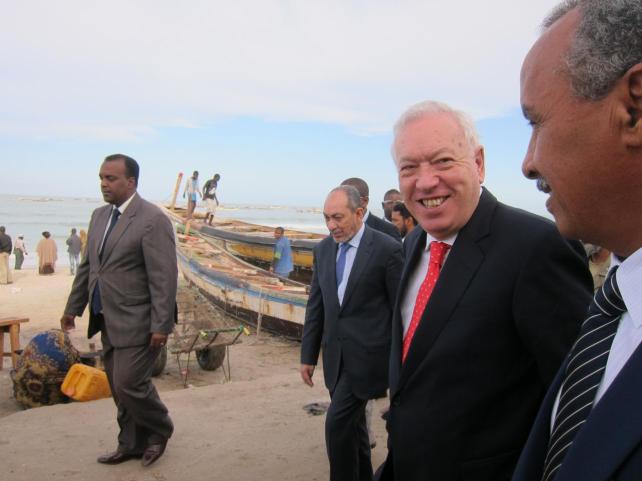 Spain has issued a new warning advising Spanish Nationals not to visit the Tindouf camps in southern Algeria as security risks are very high there.
Security risks for aid workers in the Tindouf camps “have intensified and worsened,” because of the crisis in Mali, Spanish Minister of Foreign Affairs, José Manuel García-Margallo said on Monday.
“The crisis in Mali has destabilized the entire region and deteriorated the security situation” in the Tindouf camps, said the Spanish minister during a visit to Mauritania.
“We can not speak of a situation of normality” in the camps, he insisted, recalling the kidnapping of three humanitarian workers, two from Spain and one from Italy, in October 2011 in the Rabboni camp in Tindouf.
The three hostages were released in July 2012, after a ransom of around 15 million Euros was paid to their kidnappers from the Movement for uniqueness and jihad in West Africa (Mujao).
The Spanish government had issued by the end of last January another travel warning calling Spanish nationals not to visit the Tindouf camps following the attack and hostage-taking committed by a terrorist group in the In Amenas gas field in south eastern Algeria.

In a statement, the Spanish Foreign Ministry had advised Spaniards to avoid travelling to the Tindouf camps after these events.
Western European countries have repeatedly voiced fears as to the safety of their citizens, underscoring the existence of documented evidence that elements of the Polisario are connected to terrorist armed groups affiliated to Al Qaeda as well as to trafficking networks roaming across the Sahel strip.
These fears grew after the uprising in Libya as large quantities of weapons were smuggled out from the North African country and channelled to the Sahel and the Tindouf camps.
The Malian crisis and the ensued intervention of French military troops are seriously worrying Western governments since the situation may force armed fighters to seek refuge in Mauritania, in southern Algeria or in the Tindouf camps. These governments fear for the life of the Western development aid workers and tourists present in the area as the risks of kidnappings and killings are increasing.