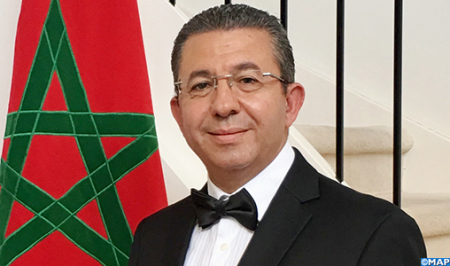 Relations between the Kingdom of Morocco and Australia are witnessing a remarkable development in various fields, said Morocco’s ambassador to Australia, Karim Medrek. “We are celebrating, this year, the 45th anniversary of the establishment of diplomatic relations,” the diplomat recalled in an interview with Australian news website “Australian Herald” published on Wednesday. This anniversary comes as an occasion to reflect on the evolution of this relationship and how to bring our two friendly countries closer, Mdrek said, adding that these relations are undergoing an excellent momentum to favor rapprochement and to seize the existing opportunities of cooperation, particularly in the economic field. The ambassador underlined in this regard the important role of the private sector in developing economic cooperation and promoting investments between the two countries, noting that Australian businessmen and investors are aware of Morocco’s position in Africa and the benefits they can get from the many free trade agreements concluded by the Kingdom. Commenting relations between the Kingdom and New Zealand and the Pacific region, the diplomat underlined that Moroccan-New Zealand relations have experienced positive dynamics for many years. “The New Zealand authorities have consistently shown their willingness to further strengthen bilateral relations with Morocco, particularly on the economic front, and recognize the Kingdom’s role as a regional leader and key economic player in Africa,” he stressed, noting that Morocco and New Zealand have a strong and longstanding commercial relationship.  South-South cooperation is one of main pillars of Moroccan foreign policy, Medrek pointed out, adding that the Moroccan approach is, indeed, highly appreciated in the Pacific region.  “More recently, with the 3rd Morocco-Pacific States Forum, we launched action plans decided jointly with each of the participating countries, which aim to develop cooperation programs on priority themes,” he said in this regard. Regarding the Moroccan Sahara issue, the ambassador, who is also Dean of the African Diplomatic Corps in Canberra, said that the Kingdom has shown a strong commitment to the political process of settling the Moroccan Sahara issue, under the exclusive auspices of the United Nations and has assumed its responsibilities by presenting the Autonomy initiative. “By presenting this initiative, Morocco pledged its resolute and irreversible commitment to achieve a political solution clearly demonstrating its flexibility, realism, and spirit of compromise,” he said, recalling that this proposal is deemed as “serious, credible and realistic” by the international community as well as by the Security Council. With regard to the recent developments, Resolution 2548 adopted by the UN Security Council on October 30, 2020, emphasizes the need to achieve a realistic, practicable, and lasting political solution to the Sahara issue based on compromise and hails the Moroccan initiative for Autonomy, Medrek added. The recent UN Resolution also welcomed the measures and initiatives taken by Morocco to promote and protect Human Rights in its Southern Provinces, he said, recalling that the United States in a historical move has recognized the sovereignty of Morocco over its Sahara and announced the opening of a Consulate General in the city of Dakhla. Moreover 20 other Consulates have opened their doors in the Southern Provinces of Morocco, he said, adding that the growing number of Consulates in the Sahara reiterates this tendency of support by the international community to the sovereignty of Morocco and to the autonomy plan as a lasting solution to this artificial dispute.