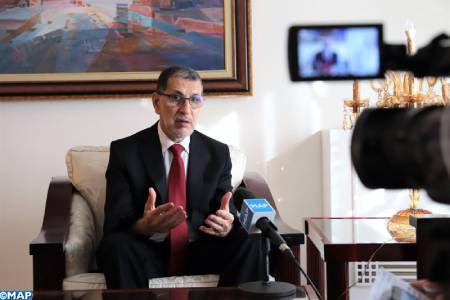 The Secretary General of the Justice and Development Party (PJD), Saad Dine El Otmani, said that the electoral programme presented by his party for the September 8 elections includes “quantified but realistic objectives”. “Our program contains a range of proposals as well as reform projects at the social and economic levels with the support of quantified but realistic objectives,” El Otmani pointed out in an interview with MAP, recalling that his party has participated in the past years in the management of public affairs at the national and local levels, also contributing to reforms launched in the country. He mentioned, in this regard, the reform led by the government in the sector of education and training, the activation of Regional Investment Centres and the simplification of administrative procedures. The PJD leader added that there are still other projects launched and that it is therefore normal to continue the reforms, noting that projects that have already been the subject of a legal organisation or a legislative review must be brought to a successful conclusion, as is the case of pre-school education. El Otmani said that the 8 September elections represent an important step in the national democratic process, in that they will be organised in a free and transparent manner in accordance with the provisions of the constitution, adding that their organisation “is in itself a successful challenge for our country and not only for political parties”. “Our party is therefore participating in these elections, aware of this challenge, with the ambition that these elections will strengthen the confidence of citizens in political action and in the institutions. A confidence that is constantly renewed and uninterrupted because disaffection represents a danger for democracy,” he stressed. “Our party, strengthened by its governmental, parliamentary and communal record, is leading a campaign in all the cities and rural areas of the Kingdom with the challenge of communicating with the citizens and listening to them,” El Otmani said. “To date, we are very satisfied with the responsiveness of the citizens. Because communication with citizens is very essential in that they become aware of the importance of this electoral moment and also of the challenges facing political parties,” he pointed out. Concerning the representation of women, he said that new legal provisions and other amendments are necessary, noting that the regional lists give priority to women, at least two or three candidates as for the local lists which favour the candidacy of six women as heads of list. All these legal provisions are capable of increasing the representation of women both in the parliamentary institution and in the local authorities, he said, adding that “this represents a step forward for our country to achieve parity.” The head of the outgoing government did not fail to reiterate the wish that all parties concerned pool their efforts to ensure the credibility of the elections of 8 September. “This is a great challenge for our party. It is true that the PJD is competing for the first places but before the announcement of the results of these elections, it is necessary that this election takes place under good auspices, allowing candidates to compete fairly and also giving voters the opportunity to express their choice freely,” he concluded.