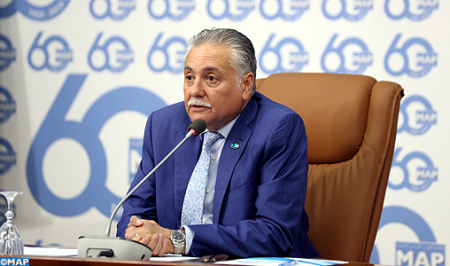 The Secretary General of the Party of the Progress and Socialism (PPS), Mohamed Nabil Benabdallah, has said that the party has more than 25 women candidates for the September 8 elections that are at the top of the lists in local and regional constituencies. “Our party places all its trust in women and places parity at the heart of its priorities. Hence, we have approved no less than 25 women heads of lists in the local and regional constituencies, in addition to a large number of young candidates and this, with the prospect of promoting the rejuvenation of the political landscape and the emergence of new elites,” he pointed out. “We have also approved the candidacies of more than 5,000 women, including a hundred as head of lists in the local constituencies,” he said, stressing that his party considers that “the new model development cannot be successful without real equality between men and women in terms of political representativeness and also in the area of administration, in addition to equal pay, the participation of women in decision-making, equality in rights in the social and cultural sectors and the revision of the family code”. Regarding the preparations of his party to meet the challenge of this major election, he stressed the “relevance” of his party’s electoral program, which is the result of several months of reflection and discussion, while underlining the mobilization of all the components of the party for these elections. PPS is not a seasonal political party, present only during electoral meetings, he said, adding that it is a party which covers the whole of the national territory and has women’s and youth organizations as well as various other sections. “This is why we took a long time to choose the best possible candidates according to rigorous criteria of integrity and competence,” he noted. Benabdallah said his party seeks to double its presence in elected councils. “This is a realistic goal, if we are to believe the echoes that reach us. And it is even probable that our party will be at the top of the table when the result of the elections is announced and create a surprise. We can achieve an electoral success on condition, of course, that the participation rate is high,” he pointed out, adding that his party does not intend to remain in the opposition forever because, like every political formation, the elections are an opportunity to strengthen its political position and gain power. Referring to the issue of alliances, the politician underlined that it remains dependent on the ideology of the partner parties which must be from the same avant-garde, nationalist and leftist movement. Nevertheless he did not exclude the possibility of building alliances with the parties that share with the PPS the same orientations contained in its electoral program, which places the human element at the heart of the development process and pleads for a strong economy supported by interventionism, the promotion of public investments, the strengthening of democracy, respect for freedoms and parity and the revision of the penal code. Regarding the electoral program of his party, Benabdallah said that it reflects the vision of the PPS for the next five years of the mandate of the next government. “This is a program that was designed on the basis of our political experience and collective reflection around major current issues, including the challenges posed by the COVID-19 pandemic, its social and economic repercussions and its impact on public health,” he said. This pandemic has shown the paramount important of the protectionist role of the state in the face of a crisis of such magnitude, even in ultra-liberal countries, the PPS Chief pointed out. “We recommend, in this regard, more state interventionism to promote investments in promising sectors, particularly in the areas of industry, digitization and green economy, in addition to the promotion of the national product and the strengthening of Moroccan companies while encouraging local products,” he said.