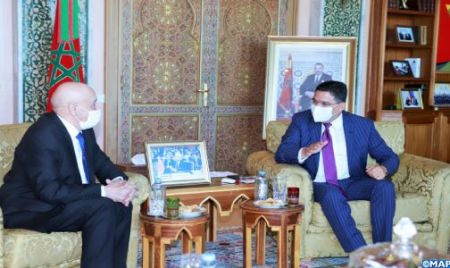 The respect of the timetable for the holding of elections, on which Libyans and civil society have agreed, is “a necessary and fundamental thing to restore stability in Libya,” said Thursday in Rabat, Minister of Foreign Affairs, African Cooperation and Moroccans abroad, Nasser Bourita. “Libya is going through a decisive stage of its political process and the holding of elections on December 23 is the only way to settle the Libyan issue,” he told the press after his talks with Speaker of the Libyan House of Representatives, Aguila Saleh, stressing that the “resolution of the crisis will not be done through Congress or external interference, but by the Libyans themselves through the democratic exercise and the organization of elections in accordance with the timetable previously set”. Bourita added that “Libyans have had enough of the state of inertia and division. It is time to settle the issue of legitimacy in Libya by holding elections on time and avoid any further complication”. In this regard, the minister highlighted the imperative involvement of all Libyan institutions that must assume their responsibilities in the preparation and success of these elections, saying that the House of Representatives of Libya is a key player in this process, given its legislative role and the prerogatives conferred on it by the Constitutional Declaration and the agreements reached between the Libyan parties. Noting the need to act on the basis of existing foundations and legal references to hold these elections, Bourita insisted that “it is necessary to create conditions for a minimum of guarantees because waiting for ideal conditions to hold these elections could drag on”. For his part, Speaker of the Libyan House of Representatives said that the settlement of the Libyan crisis can only be achieved through the organization of elections in time and the election of a president of the country who will work to achieve reconciliation and unification of Libyan institutions. Aguila Saleh stressed that the Libyan House of Representatives “has taken the necessary steps to prepare for these elections through the development of laws governing the election of its members and the head of state, and not dismissing any of the parties,” adding that all the constitutional and legal bases are ready to make these elections succeed. He stressed the importance of the support of the international community and Arab brotherly countries for the holding of Libyan elections, because “the outcome of the crisis, the unification of institutions and the achievement of national reconciliation can be achieved only through the election of a president of all Libyans through the ballot box and within the predetermined time”. Failure to hold the elections on the set date is likely to worsen the situation in Libya and create more division among all stakeholders, he concluded.