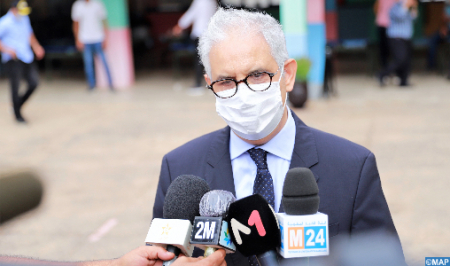 The September 8 legislative, regional and municipal elections constitute a “historic” and “decisive” moment for Morocco because of several considerations, said Wednesday in Rabat the Secretary General of the Istiqlal Party, Nizar Baraka. Speaking to reporters at the polling station where he fulfilled his national duty, Baraka mentioned, in this regard, the major challenges linked to the national cause which Morocco is facing, the economic challenges in the light of the repercussions of the current health crisis and the implementation of the new development model. “Meeting these challenges requires the strengthening of democracy, strong institutions endowed with credibility and popular legitimacy, as well as collective action to consolidate the home front with a view to facing the attacks against our country”, he pointed out. During these elections, the Istiqlal Party has submitted 92 lists with a total of 305 candidates in the local constituencies and 12 lists (90 candidates) in the regional constituencies. The party came third in the 2016 legislative elections, with 46 seats, and second in the 2015 municipal elections with 5,106 seats. Polling stations opened this morning at 8 a.m. across Morocco. Nearly 18 million voters will have to elect the 395 members of the House of Representatives (lower house) and more than 31,000 municipal and regional elected officials.