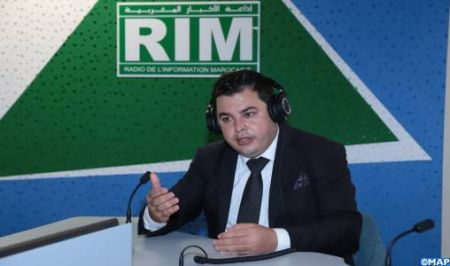 Morocco is a singular model in terms of consolidation of democracy and political pluralism, said, Mohamed Bouden, political scientist and president of the Atlas Center for analysis of political and institutional indicators. Bouden, who was Wednesday the guest of the Moroccan information radio “Rim Radio”, said that the organization of regular elections, despite the epidemiological crisis that the Kingdom and the world are going through, reflects the importance and centrality of the democratic choice in the country, adding that this choice represents one of the main constant values of the constitutional system in Morocco. He added that the electoral process in the Kingdom is distinguished by the regularity of elections, the guarantee of freedom of expression and choice, and the enshrining of transparency and credibility during all stages of this operation, stating that these three aspects consolidate the national democratic process that meets the recognized international standards. Bouden also stressed the importance of political pluralism as one of the distinctive features of public life in Morocco and a fundamental principle of the Constitution of the Kingdom, which guarantees the different components of the Moroccan people the right to participate in political life and contribute to the management of public affairs, considering that this experience has made Morocco a unique model in this field. The election of September 8 is of great importance as evidenced by the strong presence of international observers, added the political scientist, noting that the organization of three elections in one day, in the context of the pandemic and the resulting challenges on the technical, organizational and logistical, reflects the firm belief of Morocco in its democratic and institutional choices.