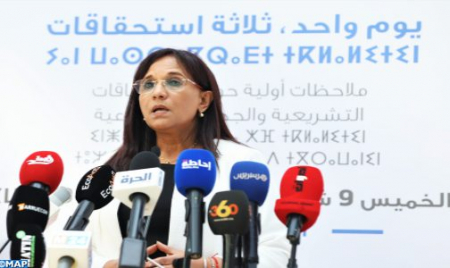 The National Human Rights Council (CNDH) on Thursday welcomed the organization of elections in Morocco on a periodic and regular basis, in exceptional and unprecedented circumstances in order to ensure the functioning of representative institutions of society. These elections took place in a context marked in particular by deep societal changes and other emerging ones linked to the repercussions of the Covid-19 pandemic at the economic and social level, the CNDH points out in its report on the observation of the 2021 elections, presented by the President of the Council, Amina Bouayach, during a press conference. These elections, the document adds, take place while the legal framework has undergone some changes compared to the previous elections in 2015 and 2016, in particular the organization of three elections in the same day for the first time in the history of elections in Morocco. The Council also notes that the Kingdom has chosen, in this exceptional and unprecedented circumstances, “not to postpone the elections, as was the case for some countries”, adding that the organization of this triple election forced the public authorities and all stakeholders to take up a double challenge, the first of which concerns maintaining the regular holding of the electoral operation and its adaptation to the exceptional context of the pandemic to safeguard the health security of citizens. “The second challenge relates to the need to ensure that the different stages of the electoral process (pre-campaign preparations, campaign and rallies, election day and announcement of results) do not lead to the spread of the virus and the deterioration of the epidemiological situation.” “This is the first time that the public authorities, human rights defenders and the mechanisms of democracy and the rule of law have found themselves having to look for formulas to organize the electoral operation in a way that secures certain balance between the protection of political and civic rights and the preservation of the right to health and life threatened by the pandemic”, according to the CNDH report. In this regard, the Council says that the public authorities have resorted to a set of restrictions during the various stages of the electoral operation, in particular during the campaigns, which constitute the fundamental means of communication and interaction between the candidates and voters, noting that these restrictions remain necessary and legitimate and fall within the framework of the powers conferred by law on the government for the management of the state of health emergency.