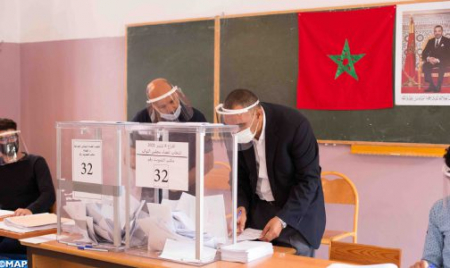 The Cercle Eugène Delacroix welcomed, on Thursday, the smooth conduct of the 2021 elections in Morocco, as they turn the Kingdom into a “democratic locomotive”, said Khadija Gamraoui, secretary general of the Cercle Eugène Delacroix. The Cercle Eugène Delacroix had been accredited by the National Human Rights Council (CNDH) to conduct an observation mission of the triple election held on September 8. “Morocco has, once again, demonstrated the strength of its democratic system,” said Ms. Gamraoui in a statement sent to MAP. “Thanks to the Constitution, Morocco has been able to carry out this triple process with agility, which turn the Kingdom into a “democratic locomotive”. According to her, this success was achieved thanks to the involvement of State services, local authorities, political organizations and the Moroccan civil society. The observation mission of the Eugene Delacroix Circle was deployed in all the regions of the Kingdom. It was able to visit 430 polling stations, including in the cities of Laayoune, Guelmin, Marrakech, Tangier, Agadir, Fez and Rabat, as well as in several villages. The deployment allowed for a comprehensive vision, in rural, suburban and urban areas. “No incidents were reported to the head of mission,” said the Cercle Eugene Delacroix in a pre-report submitted on Thursday to CNDH President Amina Bouayach. The mission also stated that candidates were treated with fairness. “Representatives of various political parties were mobilized […] in a fairly systematic manner.” In this report, the Cercle Eugène Delacroix mission observed “a very high voter turnout in the southern provinces as soon as the polling stations opened.” In urban areas, this turnout increased considerably during the election day’s last hours. “Attention was [also] given to citizens with reduced mobility,” the mission added.