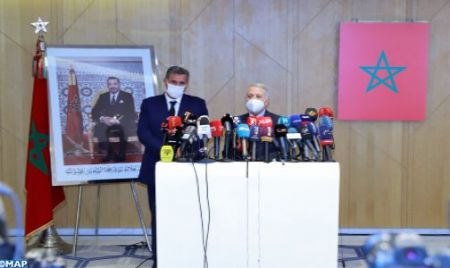 Secretary General of the Constitutional Union (UC), Mohamed Sajid, said on Monday after a meeting with the head of government-designate, Aziz Akhannouch, that his party is willing to make its contribution in this “decisive stage”. This meeting was an opportunity to express “our willingness to make our contribution in this decisive stage,” Sajid told the press on the sidelines of these consultations on the formation of the new government, adding that the UC and the RNI have historic relations with a convergence of principles, guidelines and values of citizenship and service to the country. “We have worked together on several occasions and we are willing to continue our engagement with the National Rally of Independents (RNI), whatever position or responsibilities we feel are appropriate at this stage,” added the UC SG, expressing optimism that the head of government-designate will succeed in his mission to form a cabinet. On this occasion, Sajid congratulated the president of the RNI for the royal confidence placed in his person as well as for the brilliant and deserved success that his party achieved during the elections of September 8. Stressing the importance of cooperation of all to succeed in the next stage, Sajid referred to the major expectations and challenges, including the fight against the pandemic and its repercussions as well as the implementation of the New Development Model whose cardinal principles are shared by all political bodies.