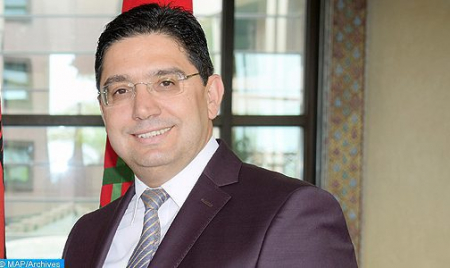 Even before its return to the African Union (AU), ties have never been broken with African countries, said Morocco’s minister of Foreign Affairs, African Cooperation and Moroccans Abroad, Nasser Bourita. “Just because Morocco was not in the AU, it did not mean that it was not engaged in Africa. It’s quite the contrary actually. Not only ties have never been broken with African countries, but they have been strengthened in an unprecedented way. During this period, Morocco has signed nearly a 1 000 co-operation agreements with African countries,” Bourita pointed out in an interview with South-African newspaper The Star published on Monday. Joining the AU has only enabled Morocco to amplify this commitment and to translate it to the multilateral level, the minister noted, adding that since its return to the AU, Morocco has contributed decisively to all issues on the AU’s agenda. “It has taken a very active part in the crucial AU reform process. It is a major donor to the AU Peace Fund, and promotes the financial sustainability of the AU,” Bourita recalled. HM King Mohammed VI has been designated as a leader on the migration issue, the minister said, adding that the Sovereign presented in this regard an African agenda for migration that was adopted by the AU. Morocco now hosts the African Migration Observatory in Rabat, which is a direct implementation of the Global Compact for Safe, Orderly and Regular Migration, which was adopted in Morocco, he underlined. Regarding the Kingdom’s vision for the continent and its hopes for the continent post-Covid19, Bourita said that Africa is a land for hope. “It is worth remembering the realities that we tend to hide because of pervasive pessimism. Africa has a young population that is set to double by 2050.” In the Covid-19 context, Morocco’s stand has been highlighted by the Kingdom’s initiatives in humanitarian aid and assistance to African states, he said, recalling Morocco’s initiative to assist 25 African brotherly countries in their national efforts to fight the pandemic. “The imminent production of a Covid-19 vaccine by Morocco confirm, yet again, Morocco’s commitment for a united, strong and resilient Africa,” he stressed. Commenting Africa’s strategy to end armed conflicts on the continent, the minister noted that many of the conflicts in Africa are, in a way or another, bound by the same underlying factors all linking to development issues and economic hardship. “The current strategy is a step in the right direction. However, this strategy alone cannot bring about peace in Africa. It must be bound to other initiatives which, as stated earlier, must focus on offering better livelihoods and conditions for local populations to thrive in, and negate situations from which conflict may arise,” Bourita underlined. Morocco’s contribution to conflict resolution in the continent is one which seeks to reconcile the different parties to a particular armed conflict, and steer clear as swiftly and convincingly as possible from arms, he said. “Without dialogue, lasting peace cannot be achieved. This is what we have sought to do with regards to the some of the continents conflicts,” the minister explained.