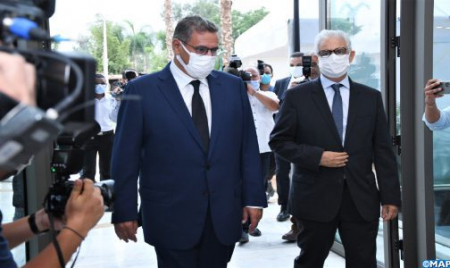 The offer presented by the designated head of government Aziz Akhannouch will be examined by the decision-making bodies of the Istiqlal Party, in particular the National Council, the party’s secretary general, Nizar Baraka, said on Monday. Speaking to reporters following his consultations with Akhannouch on the formation of the new government, Baraka said that this meeting was an opportunity to conduct a real debate, marked by the spirit of patriotism and a firm will, on the means to meet the expectations of citizens, to restore their confidence and to design the future on the basis of the new development model. Baraka described as important the consultations with the appointed head of government on the next government program, which will have to take into account the commitments made in the electoral programs of the parties that will form the next government majority. The party’s chief congratulated Akhannouch for the royal confidence, as well as that of the citizens, wishing him every success in his mission. Akhannouch on Monday began his consultations for the formation of the new government with a meeting with the secretary general of the Authenticity and Modernity Party (PAM), Abdellatif Ouahbi. The Istiqlal, one of the main opposition parties in the previous legislature, came third in the September 8 legislative elections with 81 seats, behind PAM (86) and the RNI (102). HM King Mohammed VI received Friday at the Royal Palace in Fez Mr. Aziz Akhannouch whom the Sovereign appointed head of government and tasked him with forming the new government. “We will engage, from today, consultations with the parties, with which we will be in agreement in the future, for the formation of coherent, homogeneous majority with convergent programs,” said Akhannouch in a statement to the press at the end of the audience granted to him by the Sovereign. For his part, Rachid Talbi Alami, member of the political bureau of the RNI, said on Saturday that the appointed head of government will conduct consultations with all the parties which have obtained seats in the Parliament for the formation of a coalition in order to constitute the new government.