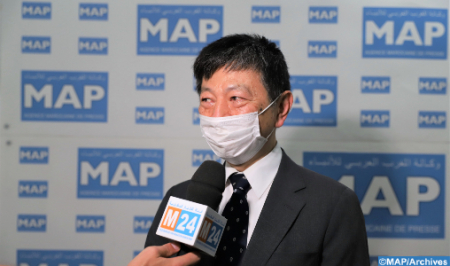 The September 8 general elections reflect the “maturity of democracy” in Morocco and represent a key step in building the future under the leadership of HM King Mohammed VI, said Tuesday the Extraordinary and Plenipotentiary Ambassador of Japan to Morocco, Shinozuka Takashi. The diplomat told MAP that he was “very impressed” by the organization of the last election, which was marked by transparency hailed by the international community. The ambassador stressed that Morocco will remain “a privileged partner in the MENA region and on the African continent” for Japan. He also expressed Japan’s readiness to work with the new Moroccan government. The legislative, communal and regional elections held on September 8, were marked by a high voter turnout of 50.35% nationwide. The first place went to the National Rally of Independents (RNI), followed by the Authenticity and Modernity Party (PAM), the Istiqlal Party (PI) and the Socialist Union of Popular Forces (USFP). HM King Mohammed VI received last Friday at the Royal Palace in Fez, the president of the RNI, Aziz Akhannouch, whom the Sovereign appointed Head of Government and tasked him with forming the new government.