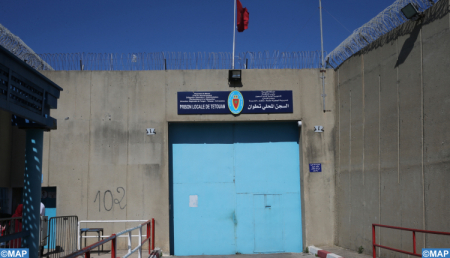 The Administration of Tetouan-2 local prison on Tuesday denied the “lies and baseless allegations” published by a Spanish newspaper regarding the “pitiful situation of Spanish detainees” in this penitentiary, “the non-release of many of them despite the end of their sentences” as well as “malnutrition” and “the absence of beds”. In a clarification, the local prison underlined that “Spanish prisoners enjoy the same rights as other prisoners and have personal beds and sufficient blankets that the prison management offers them, in addition to those brought by the members of the diplomatic representation of their country”. Spanish prisoners also benefit from balanced meals in terms of quality and caloric intake, prepared by a specialized company, the administration of the prison adds. As for the “non-release of the Spanish detainees whose sentence have ended”, the same source stresses that this is an “unfounded allegation”, adding that the administration of the prison ensures the application of the law on this matter and frees any person whose sentence has expired, in coordination with the competent judicial authorities. Regarding the deprivation of Spanish detainees of conjugal visits, the prison administration recalls that a decision was taken by the General Delegation for Prison Administration and Reintegration (DGAPR) to prohibit these visits in view of the pandemic situation, adding that prisoners previously benefited from these visits before their prohibition on July 19, 2021, due to the increase of COVID-19 cases pending their resumption after the improvement of the epidemiological situation. According to the same source, Spanish detainees receive clothes, blankets and hygiene products provided by members of the diplomatic mission of their country, whose last two visits date from September 3 and 13, and they also benefit from phone calls on the same basis as other prisoners Regarding the COVID-19 situation in Tetouan-2 local prison, no case of infection was recorded among the 23 Spanish detainees, says the Administration, adding that 19 of them were fully vaccinated as part of the campaign organized in profit of prisoners. Two inmates declined vaccination for health reasons, while the vaccination of another prisoner, who has recently joined the establishment, has been scheduled, it points out.