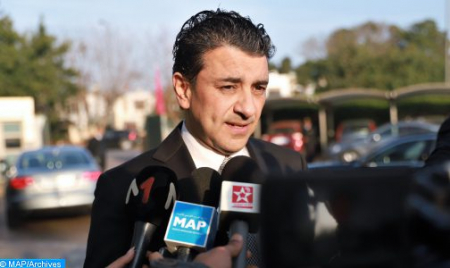 The appointed head of government, Aziz Akhannouch, on Wednesday met in Rabat with the secretary general of the Democratic and Social Movement (MDS), Abdessamad Archane, as part of the consultations for the formation of the new government. This meeting was an opportunity to have an idea on the conception of the appointed head of government regarding the formation of the majority, Archane told the press, expressing the wish to see Akhannouch “succeed in forming, as soon as possible, a coherent and strong majority”. He also congratulated Akhannouch on the royal confidence, as well as the party of the National Rally of Independents (RNI), which won the elections held on September 8. The results obtained by the RNI are the outcome of the action carried out by the party since the election of Akhannouch at its head, he said, noting that this political party has toured 100 cities of the Kingdom, on the basis of which the party program was developed taking into consideration the expectations of citizens. Archane praised the spirit of spirit of competitiveness and responsibility which marked the organization of the elections in Morocco, which, according to him, will further strengthen the democratic process in the country. Akhannouch began on Monday his consultations for the formation of the new government by consultations with several political parties.