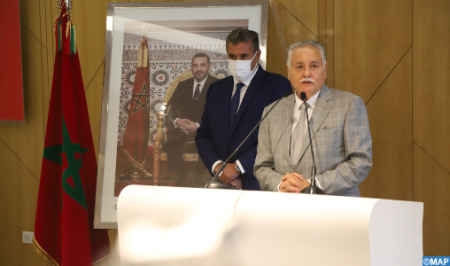 The Secretary General of the Party of Progress and Socialism (PPS), Nabil Benabdellah expressed, on Wednesday in Rabat, his wish to see the new government formed “as soon as possible.” “I hope that Mr. Akhannouch will form the government as soon as possible,” Benabdellah told reporters after his meeting with Aziz Akhannouch, the appointed head of government, in the framework of consultations carried out for the formation of a new government. “This would “allow [Akhannouch] to begin his action for the good of the Kingdom and in the interest of the Moroccan people,” he added. This meeting was an opportunity to address the major challenges that are facing the Kingdom, he said, explaining that these challenges include the consolidation of the democratic process and freedoms, the promotion of economy to create wealth and jobs, in addition to other social and environment-related issues. He also congratulated the president of the National Rally of Independents (RNI) for the Royal confidence, wishing him success in his mission. The PPS ranked sixth in the September 8 legislative elections, obtaining 21 seats behind the Popular Movement (MP, 29 seats), the Socialist Union of Popular Forces (USFP, 35 seats), the Istiqlal Party (PI, 81 seats), the Authenticity and Modernity Party (PAM, 86 seats) and the RNI (102 seats). Akhannouch started his consultations for the formation of a new government on Monday, with talks with PAM chief, Abdellatif Ouahbi, PI’s Nizar Baraka, USFP’s Driss Lachgar, MP’s Mohand Laenser and the Constitutional Union’s Mohamed Sajid.