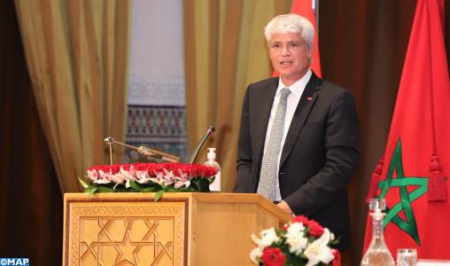 Moroccan-Swiss relations are dynamic, stable and based on trust and mutual respect, said Wednesday in Rabat, the Ambassador of Switzerland to Morocco Guillaume Scheurer. “Bilateral relations are dynamic, stable and based on trust and mutual respect and there is a willingness to further consolidate partnerships in the political, economic, cultural, research and vocational training fields,” Scheurer told MAP on the sidelines of a conference held as part of the celebration of the 100th anniversary of the diplomatic presence of Switzerland in Morocco. For the diplomat, this conference, led by famous astronaut and Swiss professor Claude Nicollier at the heart of Moroccan academic institutions, is an example that perfectly illustrates this willingness. “In the world, there are currently less than 500 astronauts. So the probability of meeting an astronaut is extraordinarily low. We are very lucky to have a Swiss astronaut and to host him in Morocco,” he said. He expressed the willingness of his country to further build bridges between Swiss companies in the fields of aeronautics and space and Moroccan researchers, academics, professors and students. During this conference under the theme “Hubble, challenge and payoff”, Nicollier shared with the audience the experience of his four missions in space between 1992 and 1999, totaling more than 1,000 hours in space, including two visits to the Hubble Space Telescope for repair and maintenance work, with one spacewalk. This specialist in avionics and space also highlighted the Hubble Space Telescope concept, developed by NASA with the participation of the European Space Agency and operational since 1990, and its added value to the scientific results obtained, particularly with regard to the study of very distant objects in the universe. The conference, organized by the Swiss Embassy in Morocco, the Academy of the Kingdom of Morocco and the Hassan II Academy of Science and Technology, is the second in a series of conferences under the theme “Innovation & Challenges of the present time”, inaugurated on June 24.