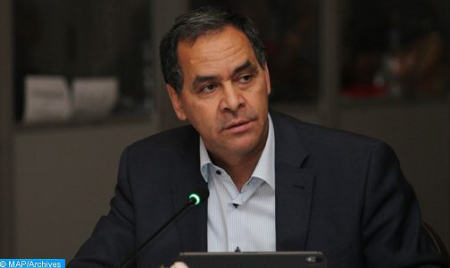 Morocco’s strong commitment to peace was reaffirmed, Tuesday in Addis Ababa, during the commemoration of the International Day of Peace by the Peace and Security Council of the African Union (AU). In this regard, Representative of the Kingdom to the AU and UNECA, ambassador Mohamed Arrouchi, who was speaking at the 1033rd meeting (public session) organized by the PSC of the Union and devoted to the commemoration of this international day and the communication on the 2nd edition of the Biennial of Luanda Pan-African Forum for the Culture of Peace, highlighted the untiring action of the Kingdom on the national and international levels. In this regard, stressed the diplomat, Morocco has acted at the national level through a religious and cultural coexistence guaranteed by the provisions of the Constitution of 2011, a national policy of immigration and asylum based on the concepts of tolerance and integration, making the Kingdom a safe of haven for many migrants coming from Africa, and also from Europe, Asia and the Middle East. The Moroccan delegation to this meeting also highlighted the principles of tolerance advocated by the Kingdom and its relations with other countries, citing in this sense the training in Morocco of African and European Imams. This public session was also an opportunity for the Moroccan delegation to highlight the Kingdom’s humane, solidarity-based and active approach towards the Continent, which was illustrated during the outbreak of the Covid-19 pandemic. On the multilateral level, Arrouchi noted that Morocco puts forward the Pan-African Agenda, capitalizing on sixty years of experience and expertise in the field of UN peacekeeping, especially on the African continent. The Kingdom has also initiated resolutions adopted at the level of the United Nations for the fight against hate speech and promoted the constructive role of religious leaders in this matter, said Arrouchi, who also cited the implementation of the resolution (1325) of the UN Security Council on “Women, Peace and Security”, through a national action plan to strengthen the participation of women at all levels.