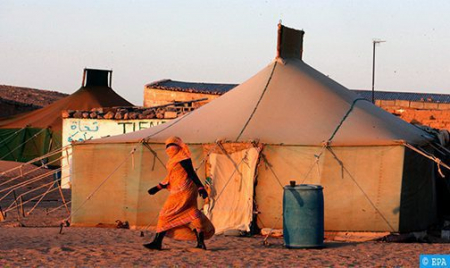 The president of the Sahrawi association against impunity in the Tindouf camps, Lemaadla Mohamed Salem El-Koury, slammed, on Tuesday in Geneva, the enforced disappearances and the violations committed by the Polisario in the said camps, stressing the full responsibility of the Algerian state in all these crimes perpetrated on its territory. Speaking during the interactive dialogue with the working group on enforced and involuntary disappearances within the framework of the 48th session of the Human Rights Council, El Koury, herself daughter of one of the victims of the enforced disappearance in the Tindouf camps in southern Algeria, denounced the impunity enjoyed by the torturers and the perpetrators of serious human rights violations and acts of kidnapping in the Polisario camps. She said that her association has so far identified 134 cases of missing persons among the hundreds of Saharawis who were kidnapped and tortured to death by the leaders of the Polisario in close cooperation with the Algerian intelligence services in secret detention centers, in particular in the prisons of Errachid and Dhaybiya near the Tindouf camps. “Despite our efforts to reveal the fate of our relatives, including through recourse to international mechanisms, the Algerian State, which bears responsibility for crimes committed on its territory in accordance with international law and the treaties it has signed, still refuses to deal with this case and deprives the families of the victims of any recourse to justice,” she noted. This attitude of the Algerian authorities, she pointed out, thus offers the torturers in the Tindouf camps absolute protection against any legal proceedings, while encouraging them to persist in the practices of kidnapping, enforced disappearance and repression of the right to freedom of opinion, expression and demonstration against the serious violence committed by the Algerian army and the militias of the separatists against the populations of the said camps. She urged the UN Working Group to “pay the necessary attention to the issue of the disappearance of our relatives in the Tindouf camps”, and to put pressure on the Algerian government to “unveil the fate of the missing persons, and recover the remains of those who died to offer them a dignified burial.”