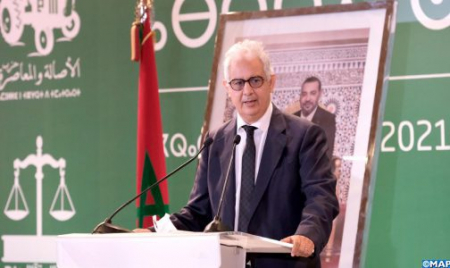 The government majority is called upon to prepare a comprehensive reform program “taking into account the commitments made in the parties’ electoral programs,” said, at a press briefing, the Istiqlal Party (PI) secretary general, Nizar Baraka. In this regard, Baraka emphasized the imperative of turning the new government’s formation process into a decisive moment for a positive interaction with the citizens’ aspirations, with the aim of restoring their confidence in the institutions to reach a future based on the New Development Model’s guidelines. The Istiqlal Party will work hard, for its part, to create an innovative alternative and a clear vision for the future, Baraka said, adding that the party will make use of its experience in the management of public affairs to contribute to the success of the government’s action. Baraka also expressed his party’s willingness to “contribute to the democratic development of our country,” together with the “programs and policies that would guarantee the success of reform projects led by HM King Mohammed VI.” The party looks forward to the emergence of a strong, harmonious government, whose “performance will be characterized by homogeneity, cooperation and efficiency,” said Baraka, insisting on the new government’s desire to break up with policies that have reached their limits. The government alliance will also be reflected at the level of territorial management, through a program that would have a positive impact, meeting the local population’s interests, Baraka continued, welcoming the coordination carried out between the government majority parties in this respect. The government majority is composed of three parties whose total number of seats reach 270. These seats are divided between the National Rally of Independents (RNI, 102) which came first in the legislative elections, the Authenticity and Modernity Party (PAM, 87 seats) and PI (81 seats).