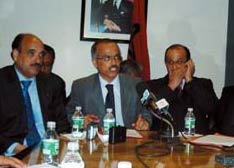 The two days of talks on Sahara issue between Morocco and the Polisario ended on Saturday with an agreement to meet again in a date and time to be convened between the parties.
The U.N-mediated negotiations at Manhasset were the second round since Morocco and Polisario submitted rival plans to the United Nations in April.The talks, facilitated by the United nations Secretary General’s Personal Envoy for the Sahara, Peter Van Walsum, were also attended by representatives from neighboring countries, Algeria and Mauritania, who were consulted separately during the two rounds of negotiations.
Those who support a just solution for Western Sahara will have to accept that as in the past, there will be interruptions in the talks and other delays as each side consults with its principals in a genuine effort to move past the rhetoric.
Indeed, during the second round of talks, the parties were able to "interact with one another and express their views”; they heard presentations by UN experts on specific issues such as natural resources and local administration, but they also have "acknowledged that the current status is unacceptable" and agreed to continue negotiations in the future to reach a final solution to the 32-year-old dispute.
While Morocco proved good faith and a true will to solve this artificial problem definitely and reach a just and fair solution, the other party chose the status quo by pretending to stick to self-determination.
The Polisario should take a realistic look at the world as it is today, which is certainly very different from the world of the 1970s and 1980s, when decolonization still loomed large in the UN agenda.
The Polisario and its supporters should do a reality check on whether their current policies are likely to be helpful in finding an early and long-term solution to the conflict.  If they do this, they could find that with discretion, persistence and good will, they might succeed in negotiating a way out of the current impasse.