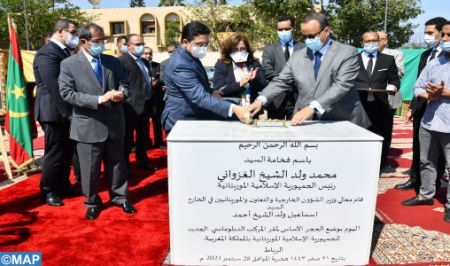 The first stone for the construction of the new diplomatic complex of the Islamic Republic of Mauritania in Morocco was laid, Tuesday in Rabat. A ceremony was held on this occasion in the presence of minister of Foreign Affairs, African Cooperation and Moroccans Abroad, Nasser Bourita, his Mauritanian counterpart Ismael Ould Cheikh Ahmed, several ambassadors accredited to Morocco in addition to representatives of elected institutions and local authorities. This facility, whose design is inspired by the authentic Mauritanian architectural art, will be built on an area of 5,341 m² and will house the administrative offices of the embassy and the residence of the ambassador. Speaking on this occasion, the ambassador of Mauritania in Rabat, Mohamed Ouled Hanani stressed that “this important project will be one of the symbols of distinguished relations between our two brotherly countries,” forming the wish to see “this building contribute to consolidate the close and multifaceted ties” between Morocco and Mauritania. He added that the Heads of State of the two countries, president Mohammed Ould Cheikh El-Ghazouani and His Majesty King Mohammed VI have constantly boosted these relations towards more progress and development. This project, which is scheduled to be completed in 18 months, embodies the Mauritanian president’s vision of modernizing the country’s diplomatic system and improving the working conditions of Mauritanian diplomatic missions by providing them with the necessary logistical and human resources, he concluded.