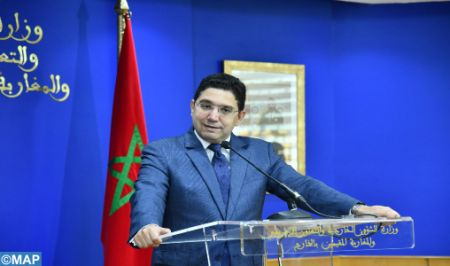 Minister of Foreign Affairs, African Cooperation and Moroccans Abroad, Nasser Bourita, said on Tuesday in Rabat that Morocco and Mauritania are united by strong ties under the impetus of the Heads of State of the two countries who ensure to safeguard the specificity and strength of bilateral relations. At a press conference following a meeting with his Mauritanian counterpart, Ismail Ould Cheikh Ahmed, the minister stressed that the two Maghreb countries and neighbors are bound by strong historical and human relations, indicating that the talks focused on ways to further promote these ties, especially in terms of bilateral political consultations and coordination on all issues, mainly those inherent in the human component, an important pillar in relations between the two countries. “Human relations between Morocco and Mauritania are unique and distinguished,” said Bourita. He noted, in this regard, that more than 60% of Arab students in Morocco are Mauritanians, adding that the training and exchange of expertise are as they have always been a fundamental of relations between the two countries. He also said that Mauritania occupies a privileged place in terms of scholarships and enrollment in major schools and universities in Morocco, given the excellent level of good neighborly relations and the strength of ties between the two brotherly peoples. Bourita also said that the talks with his Mauritanian counterpart have also addressed the upcoming events in the agenda of bilateral cooperation, including preparations for the holding of the High Joint Commission and the Businessmen’s Forum, stressing that both parties have agreed to organize the said meetings in the coming weeks in accordance with the High Directions of the Heads of State of both countries. Referring to the economic component of bilateral cooperation, Bourita deplored the fact that “the opportunities offered are not yet exploited in an optimal manner, despite the progress recorded on the bilateral economic cooperation. He highlighted, in this regard, the willingness of both countries to boost their investments, trade and projects carried jointly by Moroccan and Mauritanian private operators. The minister also said that the talks with his Mauritanian counterpart were also an opportunity to review regional and international issues, welcoming the convergence of views and close coordination between the two countries. Bourita noted that the working visit of the Mauritanian FM comes on the occasion of the laying of the foundation stone for the construction of the new diplomatic facility in Rabat, an important event that illustrates the strength of bilateral relations and reflects the determination of Mauritania to strengthen its diplomatic presence to the height of the excellent level of political, diplomatic and human relations uniting the two brotherly countries.