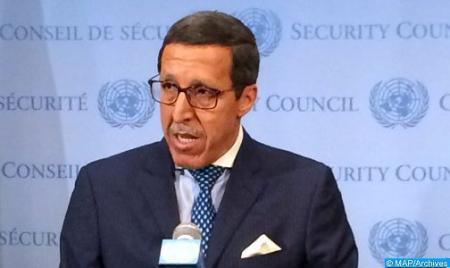 In his capacity as Chair of the United Nations General Assembly First Committee (Disarmament and International Security), the Ambassador, Permanent Representative of Morocco to the UN, Omar Hilale, called Monday in New York to safeguard the pillars of the disarmament and non-proliferation regime currently in force. “We are, more than ever, called upon to safeguard the pillars of the disarmament and non-proliferation regime currently in force, such as the Non-Proliferation Treaty (NPT) and the Comprehensive Nuclear-Test-Ban Treaty (CTBT) who have ensured and continue to ensure our collective safety and security, for more than half and a quarter of a century, respectively “, said Mr. Hilale during the opening session of the General Debate of this Committee. He regretted, in this regard, that the 10th NPT Review Conference has not taken place to date and that the CTBT has not yet entered into force to date either. The Moroccan diplomat stressed the need to increase efforts of cooperation, dialogue and diplomacy to “make multilateralism triumph again” and prevent conflicts and crises, noting that the Covid-19 pandemic is a good lesson in this regard. “This is no longer an option. In parallel with the fiftieth anniversary of the NPT and the 25th anniversary of the CTBT, the recent entry into force of the Treaty on the Prohibition of Nuclear Weapons (TPNW) is strong proof that the international community can make a difference – and a historic one moreover,” he pointed out. Mr. Hilale underlined that the issue of disarmament and non-proliferation remains a key and timeless objective of the UN and its Member States, hence the importance of the First Committee, which remains the body in charge of fostering this long-awaited difference. This body has, more than ever, an important mandate to deliver as well as a major responsibility in this world marked by several dangers, constantly changing, he noted. Mr. Hilale welcomed the “unparalleled” enthusiasm of Member States for a substantive and ambitious session this year, highlighting the trend of presenting new resolutions to the First Committee as well as of creation of new Open-ended Working Groups and Governmental Expert Groups. This reflects a significant enthusiasm for collective research, dialogue and solutions, he said. Ambassador Hilale said that the United Nations remains more than ever essential in the current international context, marked by the multiplication of conflicts, crises, tensions, terrorist threats and violent extremism. The UN “also continues to face the risks linked to nuclear proliferation, the arms race, mistrust between states or even the proliferation of non-state actors active in the illicit trade in conventional or nuclear, chemical or radiological materials,” he pointed out. The Chair of the First Committee noted that in addition to these long-standing challenges, new dangers threaten the edifice of global disarmament and international peace and security, especially those emanating from malicious use of new technologies or cyberspace. In this context, the outer and cybernetic spaces represent new frontiers that “it is our responsibility to safeguard and protect, so that they continue to serve as an engine of growth and development for Humanity”, Hilale concluded. The First Committee deals with disarmament, global challenges and threats to peace that affect the international community and seeks out solutions to the challenges in the international security regime.