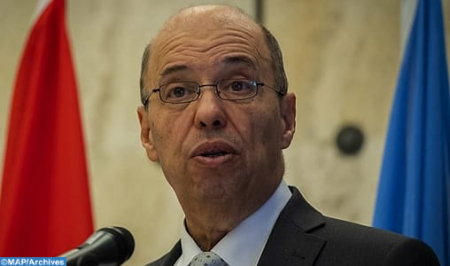 Morocco’s Ambassador and Permanent Representative in Geneva, Omar Zniber, reiterated, on Monday in Geneva, Morocco’s willingness to share its expertise to promote an efficient and productive intellectual property (IP) system. “True to its approach of making South-South cooperation a lever for development, the Kingdom of Morocco reiterates its willingness to share its expertise to promote an efficient and productive intellectual property system,” said Mr. Zniber, who presented the Kingdom’s statement at the 62th series of meetings of the Assemblies of WIPO Member States, held under the chairmanship of Morocco. In this regard, the Kingdom considers a balanced property system a “judicious” and “essential” matter, he continued, stressing that this system should increasingly target SMEs, and contribute to the integration of youth and women in economic life. In addition, Mr. Zniber ensured the continuity of WIPO’s work despite the constraints caused by the COVID-19 pandemic. This is “thanks to our common will and the Moroccan presidency’s commitment, supported by member states and the Secretariat.” Also, in spite of the complex circumstances in which Morocco has exercised this mandate, it remains that significant progress has been made, including the launch of the Medium Term Strategic Plan (MTSP) for 2022-2026, defining WIPO’s action for the next five years, he noted. “Morocco supports WIPO in its efforts to advance its work and welcomes in particular the integration of the development dimension in all structures of the Organization,” he noted. In this way, “WIPO should ensure that these standards take into account the objectives of development, including through an agreement to convene a Diplomatic Conference to adopt a Treaty on industrial designs,” said the Ambassador. This treaty would “strengthen the transparency and efficiency of the system, encourage research and innovation while contributing to the fair and equitable sharing of benefits arising from the use of these assets.” In this regard, Morocco remains convinced of the possibility of finding favorable outcomes to all pending processes, Mr. Zniber added, underlining Morocco’s strong attachment to multilateralism as a suitable mechanism for international relations’ evolution, and to the role of WIPO, whose dynamism is highly appreciated in this regard.