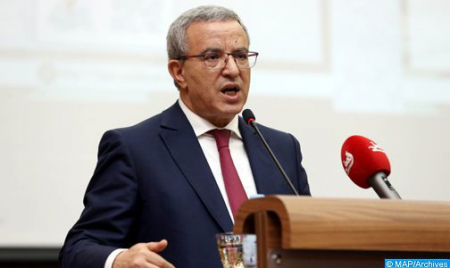 The Independent Fact-Finding Mission on Libya, mandated by the Human Rights Council, and chaired by Mohamed Aujjar, made public, Monday in Geneva, its first report, in which it mentions in particular violations likely to constitute “war crimes”. In their report presented at a press conference on the occasion of the 48th session of the HRC, the members of the Mission indicated that due to constraints “related to the budget, the Mission has begun its work only three months ago. And in this short period, it has been able to collect hundreds of documents, interview 150 people and conduct investigations in Libya, Tunisia and Italy”. It said, in this sense, that the evidence and arguments obtained by the Mission, also composed of Chaloka Beyani and Tracy Robinson, “confirm a disastrous and serious situation of human rights in Libya”. “The violence and crisis in Libya since the fall of the Gaddafi regime in 2011, and particularly since 2016, has led to serious human rights violations against all vulnerable categories, including civilians, women, children, IDPs and migrants,” according to the Mission’s experts. “There is reason to believe that war crimes have been committed in Libya, while the violence perpetrated in prisons and against migrants in the country may turn out to be crimes against humanity,” the UN Mission noted. The report further stated that the Mission’s investigations “showed that all parties to the conflict, including third countries, foreign fighters and mercenaries, violated international humanitarian law,” adding that “some committed war crimes”. Civilians have paid a heavy price during the aggressions against Tripoli in 2019, as in the various armed confrontations, Aujjar stressed in this regard, noting that “air attacks have killed dozens of families. Similarly, the destruction of hospitals has compromised access to health care, while anti-personnel mines left by mercenaries in residential areas have killed and injured civilians.” “At a time when Libyans are undertaking intense efforts to secure peace, the issue of accountability for serious human rights violations and international crimes has become more necessary than ever to prevent further violations and consolidate peace and reconciliation in the long term,” he added, urging Libya to “intensify its efforts to prosecute those responsible for these crimes”. He also called on the international community to continue to provide support to the Libyan judicial authorities.