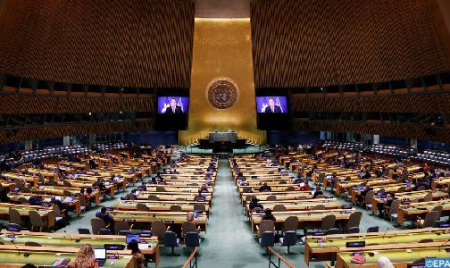 The political scientist at Gabon’s Omar Bongo University, Jean Ntougou, has called for putting Algeria before its responsibilities in the regional dispute over the Moroccan Sahara, during the United Nations General Assembly 4th Committee. Ntougou also called to “bring this country to positively contribute to the settlement of the Moroccan Sahara issue,” stressing that Algeria “continues to provide substantial military, financial, political and diplomatic support to the polisario separatists.” In this respect, Ntougou warned against the “major” threat of transforming Tindouf into a rear base of terrorist groups hunted in the Sahel, considering that their presence would awaken dormant terrorist cells, once present in Algeria, which would in turn increase terrorist threats throughout the Maghreb region and beyond. In addition, Ntougou noted that the autonomy plan proposed by Morocco, which “fascinates all diplomatic bodies concerned with the restoration of historical truth and dignity of the people living in the southern provinces of the Kingdom,” is “one of the few fair and equitable proposals ever put on the negotiating table.” This initiative, he insisted, deserves support due to its consistency with universal values and reality in terms of history, society, culture, and even law, especially when referring to the Madrid agreements.