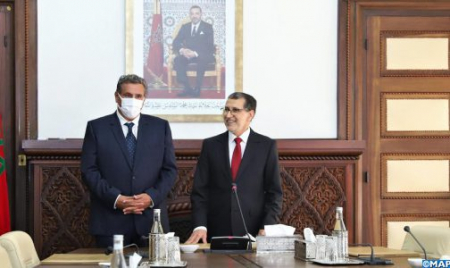 The transfer of powers ceremony between Saad Dine El Otmani and Aziz Akhannouch, appointed head of government by HM King Mohammed VI, took place Friday morning. Speaking on this occasion, El Otmani congratulated Akhannouch for the trust placed in him by the Sovereign, wishing the new Cabinet success in fulfilling its mission. He also extended to Akhannouch his wishes for success in his new position in the service of the Kingdom, with a view to achieving good results in the light of the various challenges faced, including those related to Covid-19. For his part, Akhannouch praised El Otmani for the seriousness that has marked the action of the government majority despite the difficulties that any Executive can face, politically and economically. He also congratulated Mr. El Otmani for the success of the actions of the outgoing government which delivered great results, noting that the former Executive has worked on the implementation of several development as well as social and economic projects under the leadership of HM King Mohammed VI.