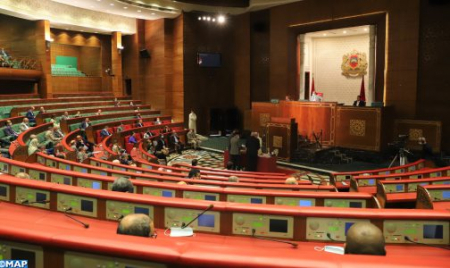 – The House of Advisors held on Sunday a plenary session devoted to the election of the members of the bureau of this institution and the presidents of standing committees, in accordance with the provisions of Article 63 of the Constitution. Mohamed Hanine of the group of the National Rally of Independents (RNI) was elected first vice-speaker of the House of Advisors, Ahmed Akhchichine of the group Authenticity and Modernity, second vice-speaker, Fouad Qadiri of the Istiqlalien group of unity and egalitarianism, third vice-speaker, Mehdi Atmoun of the haraki group, fourth vice-speaker and Abdeslam Belkchour of the Socialist group, fifth vice-speaker. Three quaestors of the House were also elected namely: Mohamed Salem Benmasoud from the group of the General Union of Workers of Morocco (UGTM), Miloud Maassid from the group of the Moroccan Labor Union (UMT) and Abdelilah Hafdi from the group of the General Confederation of Morocco’s Enterprises (CGEM), as well as the three secretaries of the House: Mustapha Moucharik and Jawad Hilali from the group RNI and Safia Belfakih from the group Authenticity and Modernity. As for the presidents of the standing committees, Aziz Mknif of the Socialist group was elected chairman of the committee on justice, legislation and human rights, Messaoud Agnaou of the Authenticity and Modernity group, chairman of the committee on finance, planning and economic development, Abderrahmane Ablila of the RNI, chair of the committee on the interior, local authorities and basic infrastructure and Neila Mia Tazi of the CGEM group, chair of the committee on foreign affairs, national defense and Moroccans abroad. Abderrahman Drissi of the Haraki group was elected chairman of the committee on education and cultural and social affairs, and Othmane Tarmounia of the Istiqlalien group of unity and egalitarianism, chairman of the committee on productive sectors. This session was also marked by the presentation of the presidents and members of parliamentary groups and groupings in the House of Advisors. Groupings coordinators were also presented. On Saturday, Naam Miyara was elected as speaker of the House of Advisors.