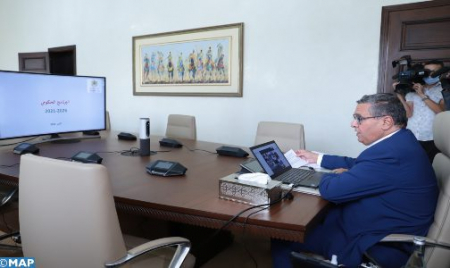 The Head of Government, Aziz Akhannouch, on Monday underlined the determination of his cabinet to meet the ambition of His Majesty King Mohammed VI, who constantly seeks to provide the conditions for a dignified life to citizens and to make Morocco a pioneering country at the regional and international levels. A statement from the Department of the Head of Government, issued at the end of the first meeting of the Council of Government held remotely, said that Mr. Akhannouch expressed his pride and that of all the members of the Executive at the High Royal confidence and the High Guidelines contained in the Royal speech addressed to the two Houses of Parliament. “The Royal speech at the opening of the legislative session puts us all, clearly, before the external and internal challenges that our country is facing,” said Mr. Akhannouch during this meeting devoted to the presentation of the government program’s outlines. The Head of Government said that the new process in which the cabinet is engaged, following the High Royal confidence as well as that of Moroccans, requires to deal with the expectations and aspirations placed on this government in a serious manner, while being aware of the decisive character of the current and future stage. He noted that the exceptional context which Morocco is facing requires a strong commitment and a great mobilization at the domestic and external levels. At the external level, it is a matter of strengthening the achievements and supporting the first national cause of the country, and consolidating the aura and the position enjoyed by the Kingdom at the continental and international levels, thanks to HM the King’s vision. At the domestic level, Akhannouch stressed that it is about facing the crisis triggered by the repercussions of the COVID-19 pandemic, with all implications in terms of necessary reforms regarding important and vital sectors and overcoming the problems and dysfunctions that have become unacceptable in today’s Morocco.