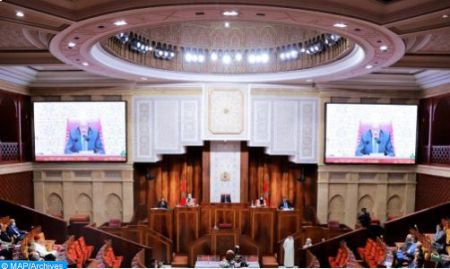 The parties of the government majority in the House of Representatives affirmed, Wednesday, that the commitments contained in the government program are both ambitious and realistic and have provided clear and transparent answers regarding several expectations of political and socio-economic nature. In a plenary session devoted to the discussion of the government program, the groups of the parliamentary majority in the lower house expressed their support for the Executive to translate into action the said program, expressing their willingness to present the “constructive” proposals and comments necessary, to enrich and improve all projects, strategies and programs of implementation, as well as measures to serve the best interests of the Nation. In this regard, the group of the National Rally of Independents stressed that the government program presented Monday before the two Houses of Parliament, by the Head of Government, Aziz Akhannouch, has grouped in a single commitment the economic and social issues. The government program also emphasizes the successful management of the exit stage of the crisis, added the parliamentary group, praising the participatory approach adopted for the design and implementation of government plans to upgrade and support the impacted sectors. The Authenticity and Modernity group (PAM) expressed its “optimism” about the success of the current governmental experience, affirming its strong and continuous support to make the governmental program succeed. It also welcomed the identification by the Executive of the main commitments in the context of interaction with the pressing social expectations and control of the effects of the pandemic and the achievement of economic takeoff. This program adheres to a number of large-scale projects, including those inherent in the political and democratic reform, the consolidation and defense of the territorial integrity of the Kingdom, the strengthening of democratic choice and the continuation of advanced regionalization, said the parliamentary group. For its part, the Istiqlali group of Unity and Egalitarianism lauded the content of this governmental program, while expressing its wish to see all the promises concretized within the framework of balance, cooperation and complementarity between the legislative and executive powers, and to place these commitments at the heart of public policies “in order to raise the level of confidence of Moroccans, especially young people, in institutions, in particular elected institutions, the government and the parliament”. The Constitutional, Democratic and Social group, which adopted the position of critical support to the government, stressed that the government program includes many social, economic and reform priorities that constitute fields of consensus and convergence, aiming to strengthen the dignity of the citizen, to achieve more social and spatial justice, to continue the creation of effective territorial institutions and to consolidate the pillars of the social state and cohesion between the different segments of society.