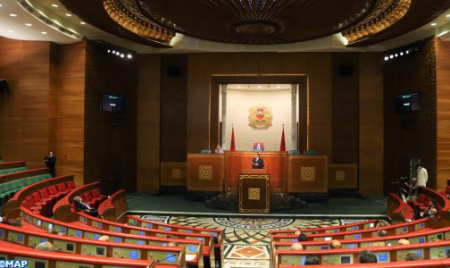 Opposition groups in the House of Advisors (upper house) deplored, Wednesday in Rabat, the fact that the government program reproduced the projects adopted by the previous cabinet. Speaking at a plenary session dedicated to the discussion of the government program, in which the head of government, Aziz Akhannouch took part, the Haraki group noted that “at a time when this document was expected to reflect the electoral programs ambitious announced during the elections, we discover some passages of the program of the majority party, with a very timid presence of the programs of the other political parties”. The Haraki group believes, in this regard, that the government program has transposed paragraphs of the report on the new development model without defining the implementation mechanisms required, noting that “the Welfare State is based on the values of equity and territorial justice and on the revision of salaries and the budget overhaul and especially on inter-regional equality in terms of the orientation of public investment, so many issues that were neglected in the declaration of the Government”. For its part, the Socialist Group said that the measures taken to strengthen the foundations of the welfare state remain below aspirations to face the social exclusion of poor and vulnerable categories and reduce spatial and social disparities. The group also said it expects concrete measures to reduce multidimensional disparities, as well as a well-crafted program to build a social protection system that is more equitable, efficient and resilient to social and economic hazards. After welcoming the government program as being “a promising and distinguished program”, the Social Justice and Sustainable Development group noted “the absence of a clear agenda and the necessary digital details”, noting that the government program does not explain the financing methods to be adopted for the various measures taken.