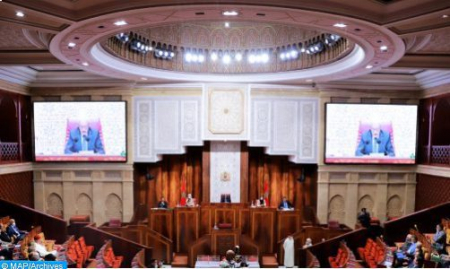 The House of Representatives (lower house) takes part in Djibouti city in the 76th session of the Executive Council and the 43rd Conference of the African Parliamentary Union (APU). Speaking to African parliamentary delegations, Mr. Mohamed Touimi Benjelloun, who leads the Moroccan delegation, stressed that the House of Representatives is committed to participating regularly in the work of the PAU, highlighting progress made by the Kingdom in the fight against Covid-19 and the measures adopted to curb the spread of the virus, the Lower House says in a release. Mr. Touimi stresses that Morocco has embarked on a major project to produce Covid-19 vaccines, with a monthly production capacity of five million doses by the end of the year, adding that the production will be revised upwards in the years to come. This project will primarily benefit African countries, within the framework of South-South cooperation, a strategic orientation in which the Kingdom is committed in its relations with its African family, he pointed out. On the sidelines of these meetings, Mr. Touimi held talks with the Speaker of the Djiboutian National Assembly, Mr. Mohamed Ali Houmed, which focused on the means to strengthen bilateral parliamentary relations and on the need to activate the mechanisms of the friendship group in order to re-launch the exchange of visits between the two countries, the statement said. After commending the excellent relations of cooperation between the two countries, the two sides stressed the need to elevate economic relations to the level of distinguished political relations, through the exchange of visits between different government officials. Morocco’s House of Representatives joined the African Parliamentary Union in November 1978 and has since been keen to participate effectively and regularly in its conferences and in the meetings of its executive bodies as well as in the various specialized, sectoral and regional meetings that it organizes, with a desire to develop the relations of fraternity and cooperation that Morocco maintains with the countries of the continent, in addition to the defense of the territorial integrity of the Kingdom.