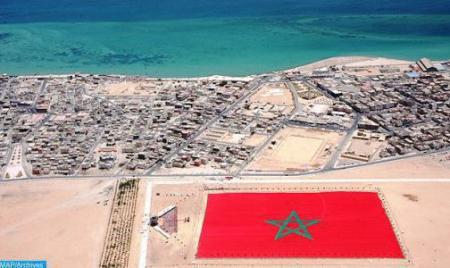 Saudi Arabia reiterated Tuesday in New York, its support for the sovereignty and territorial integrity of Morocco, highlighting the Kingdom’s efforts to find a political and realistic solution to the Moroccan Sahara question. “Saudi Arabia rejects any attack on the supreme interests or the sovereignty and territorial integrity of the brotherly Kingdom of Morocco,” said Ambassador Abdallah Al Mouallimi, Permanent Representative of Saudi Arabia before the 4th Committee of the UN General Assembly. He also stated that his country welcomes, once again, the holding of two roundtable meetings on the Moroccan Sahara with the participation of Morocco, Algeria, Mauritania and the “polisario”. “We call for pursuing this process to reach a final solution to a conflict that has lasted too long,” Al Mouallimi stressed, affirming that Saudi Arabia supports the efforts undertaken by Morocco to find a political and realistic solution to the Moroccan Sahara question based on the compromise and the resolutions of the Security Council, and under the auspices of the UN Secretary-General. The Saudi ambassador reiterated the support of his country to the Moroccan autonomy initiative within the framework of the sovereignty of the Kingdom and its territorial integrity, noting that this is a solution under international law, the UN Charter and the resolutions of the Security Council and the UN GA. This initiative has been welcomed by the Security Council through resolutions adopted since 2007, he said, adding that his country also welcomes the participation of Sahrawi elected officials in the sessions of the Committee of 24 and the two roundtable meetings in Geneva. Morocco has strengthened the economic and social development in the Moroccan Sahara as part of the new development model and major achievements in human rights, he noted. Al Mouallimi also highlighted the efforts made by Morocco in the fight against the Covid-19 pandemic by providing vaccines to populations in the Moroccan Sahara. Reiterating its support for Morocco’s efforts to find a solution to this regional dispute, Saudi Arabia recalled the importance of compromise between all parties involved. The ambassador also stressed that the settlement of this conflict over the Moroccan Sahara will help ensure security and stability in the Sahel region.