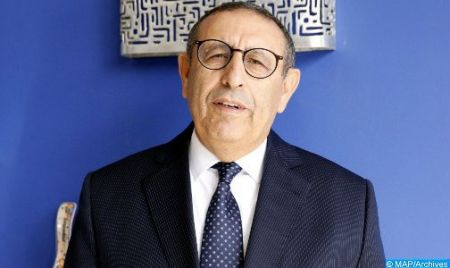 The Moroccan policy of disarmament and non-proliferation is based on principles and values that the Kingdom respects and promotes with constancy and continuity, said, Thursday in Johannesburg, Moroccan ambassador to South Africa, Youssef Amrani. Speaking at the headquarters of the Pan-African Parliament (PAP) at the opening of the 5th session of the Conference of States Parties to the African Nuclear-Weapon-Free Zone Treaty (Treaty of Pelindaba), Amrani, who is leading a Moroccan delegation also composed of Khammar Mrabit, Director General of the Moroccan Agency for Nuclear and Radiological Safety and Security (AMSSNuR), and Youness Sassi, a diplomat at the Moroccan Embassy in Pretoria, said that Morocco’s commitment to disarmament and non-proliferation is reflected in its adherence to the majority of multilateral treaties and instruments, including the Nuclear Non-Proliferation Treaty which is the cornerstone of the non-proliferation regime. “We have an unwavering commitment to advocate for a safer and more coherent multilateral system that fully reflects the principles of the UN Charter and International Law,” he said, noting that the Kingdom has always supported international non-proliferation and disarmament efforts and that it fully and transparently respects international commitments in the implementation of the instruments to which it has subscribed. Noting that Morocco reiterates the important contribution of nuclear-weapon-free zones to the overall objectives of the Non-Proliferation Treaty, the ambassador stressed that international and regional peace and stability require relevance in the decisions taken. He recalled in this regard that Morocco had signed the Treaty of Pelindaba in April 1996 in Cairo and was among the first nations to sign the Comprehensive Nuclear-Test-Ban Treaty. “Morocco has in this sense co-chaired with France in September 2009 the ministerial conference on Article XIV to accelerate the ratification of the Treaty by encouraging African countries to ratify this instrument, in order to facilitate its entry into force,” he said.