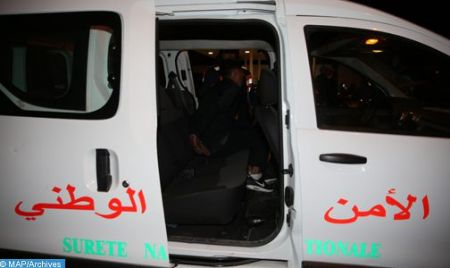 Elements of the regional service of the judicial police of Errachidia arrested, Thursday morning on the basis of accurate information provided by the services of the Directorate General of Territorial Surveillance (DGST), four individuals for their alleged links with a criminal network of international drug trafficking. The arrest of suspects, aged between 25 and 52 years and two with criminal records, was conducted in coordination with the elements of the Royal Gendarmerie at the rural town of “Kadoussa” about 40 km from the city of Errachidia, said the national police (DGSN) in a statement, specifying that the individuals were apprehended red-handed in possession and trafficking of 37 packets of chira, weighing one ton and 48 kilograms. The suspects were placed in custody to complete the investigation conducted under the supervision of the prosecutor’s office, in order to identify the possible ramifications of this criminal activity and to determine all the criminal acts of these individuals, the same source added. The foiling of this operation is part of the intensive efforts of the security services to counter drug trafficking, the statement concluded.