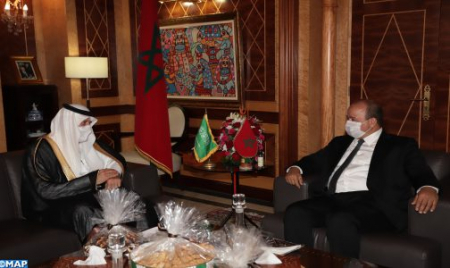 The Kingdoms of Saudi Arabia and Morocco enjoy strong relations that draw their strength from the close fraternal ties between the Custodian of the Two Holy Mosques, HM King Salman Bin Abdulaziz Al Saud and HM King Mohammed VI, and between the two brotherly peoples, stressed, Monday, the Saudi Ambassador in Rabat, Abdullah Bin Saad Bin Mohamed Al Ghariri. During a meeting in Rabat with the speaker of the House of Advisors (Upper House), Naam Miyara, the Saudi diplomat welcomed the level of cooperation between the two countries in various areas, highlighting the willingness to move forward in this cooperation so as to promote investment and trade and economic exchanges, said a statement from the Upper House. He also praised the effective approach adopted by Morocco to curb the spread of the coronavirus pandemic, under the leadership of HM King Mohammed VI. Quoted in a statement from the House, Al-Ghariri congratulated the new speaker of the House of Advisors, Naam Miyara, and hailed the positive climate in which the last elections were held at the national, regional and local levels. On this occasion, the two sides welcomed the quality of bilateral relations in the political, economic, social, cultural, and religious sectors, resulting from the high solicitude of the two sovereigns. For his part, Miyara thanked the Kingdom of Saudi Arabia for its continuous support for Morocco’s territorial integrity and the autonomy initiative under Moroccan sovereignty. He reiterated the full solidarity of Morocco and its unwavering support to the brotherly Kingdom of Saudi Arabia for the defense of its stability, sovereignty, and security of its citizens and residents. Miyara stressed the importance of developing economic cooperation, supporting investment, and facilitating relations between businessmen in both countries.