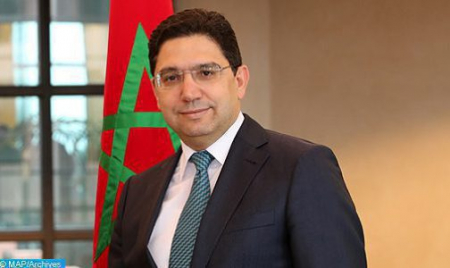 It is time for the African Union-European Union partnership to undergo a strategic update, said Tuesday in Kigali, the Minister of Foreign Affairs, African Cooperation and Moroccans Abroad, Mr. Nasser Bourita. “Our partnership should not be reduced to adopting documents and applauding hard-negotiated consensuses. On the contrary, it should measure the progress and commend the projects that have been achieved,” said Mr. Bourita at the second ministerial preparatory meeting of the 6th AU-EU Summit.  Referring to the strategic nature of the Africa-Europe partnership, the Minister noted that this partnership is born of a common desire to build a space for dialogue and cooperation for security, development and shared prosperity. This partnership, said Mr. Bourita, has “demonstrated its relevance, since we have remained committed to it for two decades,” adding that the AU-EU partnership has gained in structuring, with regular ministerial meetings and permanent working groups between the AU and the EU. This structuring is necessary, but is not an end in itself, said the Moroccan Minister, noting, in this sense, that “the ultimate goal remains the achievement of the framework objectives formulated in the Declarations of the Cairo Summit of April 2000 and the Abidjan Summit of November 2017. Furthermore, Mr. Bourita noted that while the objectives remain relevant, the collective approach is in need of renewal. “Since 2000, we have adopted three roadmaps, but how many have we achieved”, he wondered, saying that collective action is still too slow to become tangible achievements. Referring to the 6th AU-EU Summit scheduled for next year in Brussels, the Minister said that this summit will be an opportunity to give new impetus to the Africa-Europe partnership. He also welcomed a proposal delivered by the Rwandan Minister of Foreign Affairs, Vincent Biruta, for the creation of a Ministerial Monitoring and Implementation Committee to ensure tangible results and effective objectives implementation. According to Bourita, this committee could help make the AU-EU partnership more visible to the populations of both continents, especially the youngest, by identifying and developing activities that have an impact on daily life. “Morocco is willing to be part of this committee and host its first meeting,” he pointed out  On the sidelines of his participation in the 2nd AU-EU Ministerial Meeting, Mr. Bourita held a series of bilateral meetings with several African and European foreign ministers. This 2nd meeting is jointly chaired by the Minister of Foreign Affairs of the Democratic Republic of the Congo, Christophe Lutundula, whose country currently chairs the AU, and the High Representative of the European Union for Foreign Affairs and Security Policy and Vice-President of the European Commission, Josep Borrell. At the meeting, EU and AU foreign ministers took stock of progress made since the fifth EU-AU summit (Abidjan, 29-30 November 2017), exchanging views on EU-AU partnership and ways to strengthen cooperation.